The Sphynx is not the first instance of hairlessness in domestic cats. This natural, spontaneous mutation has been seen in various locations around the world for at least the last ninety-something years, and probably longer. The Book of the Cat (Simpson, 1903), mentioned a pair of hairless cats belonging to a New Mexico fancier. 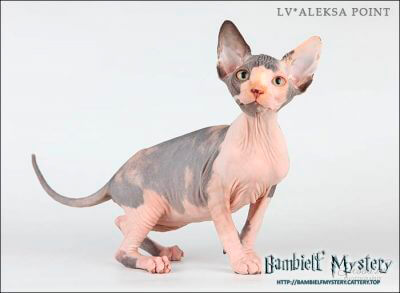 Called the “Mexican Hairless”, these cats supposedly were obtained from Indians around Albuquerque. In 1950 a pair of Siamese cats in Paris France, produced a litter that included three hairless kittens. The results were repeated in subsequent matings of the same pair, but breeding the parents to other Siamese cats produced no new hairless kittens.

Other hairless specimens turned up in Morocco, Australia, North Carolina, and, in 1966, in Canada, where a pair of domestic shorthairs produced a litter that included a hairless kitten. A breeder named Ryadh Bawa obtained the parents and, with the help of other breeders, began a breeding program.

The CFA originally granted New Breed and Color status, and then in 1971 they withdrew recognition due to infertility problems with the breed. This line was not pursued after 1980 and is not part of the current bloodline. The breed as we know it today began in 1975, when Minnesota farm owners Milt and Ethelyn Pearson discovered that a hairless kitten had been born to their normal-coated farm cat, Jezabelle. This kitten, named Epidermis, was joined the next year by another hairless kitten named Dermis. Both were sold to Oregon breeder Kim Mueske, who used the kittens to develop the breed. Georgiana Gattenby of Brainerd, Minnesota, also worked with kittens from the Pearson line, using Cornish Rex as an outcross. At almost the same time (1978), Siamese breeder Shirley Smith of Ontario, Canada, found three hairless kittens on the streets of her neighborhood. In 1983 she sent two of them to Dr. Hugo Hernandez in the Netherlands. Dr. Hernandez bred the two kittens, named Punkie and Paloma, to a white Devon Rex named Curare van Jetrophin.

The descendants of these cats, along with the descendants of the cats from Minnesota and Oregon, became the foundation of today’s Sphynx breed. The breed has made considerable strides since its inception due to a small group of dedicated breeders. While most fanciers have welcomed the Sphynx as unique and exotic, some members of the cat fancy wish that the Sphynx would put on some clothes. Like other breeds that have diverged from the basic design, the Sphynx has drawn some negative attention. Also, the gene that governs hairlessness can be considered a genetic disorder, since the cat is more susceptible to both heat and cold. On the other hand, fanciers argue that we humans are pretty much hairless ourselves compared with our closest relatives, and we’ve managed to get by pretty well.

Breeders and fanciers are currently working toward CFA recognition. The Sphynx would be required to come in as a new breed, rather than one previously recognized. According to the French breed standard, the Sphynx is part monkey, part dog, part child, and part cat. The breed does seem to possess some personality traits of each, despite what geneticists might say about such a combination. To say Sphynxes are lively is an understatement; they perform monkey-like aerialist feats from the top of doorways and bookshelves. Very devoted and loyal, they follow their humans around, wagging their tails doggy fashion and purring with affection. They demand your unconditional attention and are as mischievous (and lovable) as children. And despite all that and their alien appearance, they are completely cats, with all the mystery and charm that has fascinated humankind for thousands of years.

While the Sphynx may not be for everyone, its unique appearance and charming temperament has won it an active, enthusiastic following.

General: The Sphynx appears to be a hairless cat, although it is not truly hairless. The skin should have the texture of chamois. It may be covered with very fine down that is almost imperceptible to both the eye and the touch.

Body: Size medium; length medium to medium long; chest broad, may tend toward barrel-chested; abdomen well-rounded, with the appearance of having eaten a large meal; boning medium; hard and muscular, not delicate.

Ears: Very large; broad at base and open; set upright, neither low set nor on top of head; interior totally hairless.

Eyes: Large; shaped like a rounded lemon; placement slanting to outer corner of ear. Color ideally to conform to coat color, but green and hazel acceptable.

Tail: Whippy, tapering from the body to the tip, length in proportion to the body. Lion tail (a puff of hair on the tip) is acceptable.

Coat: Appears hairless; texture chamois-like; may be covered with short, fine down; may have puff of hair on tip of tail; whiskers sparse and short.

Color: All colors in all divisions; white lockets and buttons accepted.

Disqualify: Any indication of wavy hair or suggestion of the Devon Rex, or Cornish Rex in molt; any evidence of depilating, plucking, shaving, or clipping, or any other means of hair removal; unable to handle.

This article was written by Hugo the Cat.